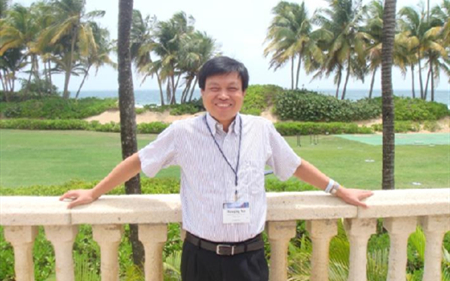 Xie Huaqing holds a Doctor’s degree in Engineering, and is a professor and doctoral supervisor. He currently serves as Vice President of Shanghai Polytechnic University.

He graduated from University of Science and Technology of China with a major in Engineering Thermophysics (five-year system) and obtained doctor’s degree from    Shanghai Institute of Ceramics of Chinese Academy of Sciences, majoring in Materials Science and Engineering. He successively studied and worked at Mechanical Engineering Department of University of Kentucky (US), Advanced Manufacturing and Design Institute of Mechanical and Aerospace Engineering Department of Seoul National University (ROK), and Institute of Advanced Material Study of Kyushu University (Japan). Since working in Shanghai Polytechnic University in 2006, he has served as a professor, Vice Dean (in April 2006), Dean (in April 2010), and Vice President (in July 2014). He has got funded by the programs such as the first group of Specially-Appointed Jinqiao Professors of Shanghai Polytechnic University, Shanghai Pujiang Program, Shanghai Shuguang Scholar Program, first group of Shanghai Specially-Appointed Professors (Oriental Scholar), New Century Outstanding Talents of the Ministry of Education and first group of Oriental Scholar Follow-up Program.

In recent years, he is committed to the experiments and theoretical research of energy saving and new energy materials, and microscale heat transfer. As the project leader, he has successively presided over 5 programs of National Natural Science Foundation, 1 program of national 863 Program, and more than 10 provincial-level and ministry-level projects. So far, he has published more than 120 papers included by SCI. According to retrieval data, the H index is 27, and his papers have been quoted by SCI sources for more than 3,000 times. Six of his papers have been quoted for more than 100 times, and the one with most quotations has been quoted for more than 400 times (as of 2014). He has applied for more than 50 national patents for invention, and 13 of them have been authorized. He has been awarded one second prize and one third prize of Shanghai Award for Natural Science (both ranking the first place), and one prize of China University-Industry Cooperation Innovation Achievement (ranking the first place). He was listed in highly quoted Chinese scholars by Elsevier for 2014. In addition, he is also member of Heat and Mass Transfer Sub-committee of Chinese Society of Engineering Thermophysics, member of Thermophysical Property Committee of Chinese Society for Measurement, member of Shanghai Society for Advanced Materials, and etc.